We received a call from a local Petco that when they came into work they found somebody had dumped three snakes in tubs in front of the store sometime before they got there.
The three snakes turned out to be a prairie kingsnake (Lampropeltis calligaster), a western ratsnake (Pantherolhis obsoletus) and an eastern ratsnake (Pantherophis alleghaniensis) (formerly known as a yellow ratsnake).
All were in tubs that smelled horrible due to soaking wet bedding, had mold and fungus, dead and decaying rodents, flies and maggots. Tubs went immediately into the trash and snakes were bathed and cleaned up.
The western ratsnake has some mouth rot issues (see pictures) and part of the upper lip area is gone. She will go on antibiotics immediately with cleanings of the area every day.
The eastern ratsnake definitely is thin and needs a couple of good meals.
The prairie king actually looks good considering.
All were placed in quarantine for parasites after being cleaned up and examined.
All 3 are native to the US, the eastern rat being the only one not native to Texas. None can be released so they will join our education team when healthy enough to do so. 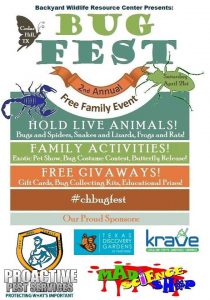 We had so much fun last year, we can’t wait to do it again! There’s even more fun and free stuff to do, too! Besides getting to know our amazing animals and winning educational prizes, you can now enter our Exotic Pet Show or Bug Costume Contest courtesy of Texas Discovery Gardens at Fair Park and Krave! (entry forms in the Discussions) Plus, we’ll have a Live Butterfly Release sponsored by Mad Science Shop!

We were very honored, and shocked, to learn that we had been nominated for, and received the 2018 National Wildlife Rehabilitators Association Marlys J. Bulander “Working Together for Wildlife Award” for our work during hurricane Harvey.
Our work during that time would not have been possible without our wonderful friends and supporters. Three trips to south Texas, lots of supplies, lots of late nights working on feeding babies.
A huge thank you goes out to everybody. We could not do what we do without your support! 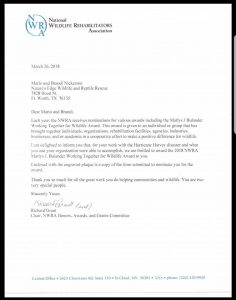 We got a couple of requests for an update on the Great Horned owl chick (Bubo virginianus).
As you can see, growing like a weed! 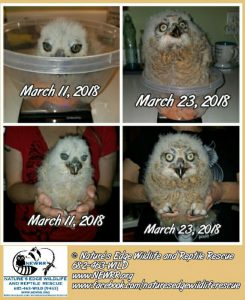 Please Don’t Cut Down Those Trees!!!

Well baby season is already in full swing here in Texas. Already getting in squirrels, opossums, and owls. Yesterday we got in a female red phased screech owl and her eggs. She was hit with a chainsaw and could not be saved, all her eggs busted when the tree fell. Please remember that lots of animals use trees and they should be taken down in non breeding season.
Feel free to share this! 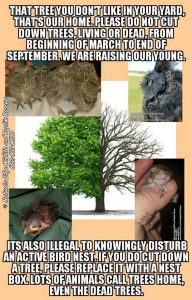 We got the privilege of helping another rehabber with a pre release check up and the release of an adult male bald eagle (Haliaeetus leucocephalus). This guy was amazing.

We told y’all it is baby season. We took in this little guy on Tuesday. Baby great horned owl (Bubo virginianus) approx 7-9 days old in this picture. All charts say this is the point they open their eyes. You can still see the egg tooth that is used to break open the egg when they hatch. Home owner found it Saturday and tried getting it back to mom, but unfortunately that did not work out. Was dehydrated and a touch thin when we got it. Recovering well and devouring food. These owls eat a ton of food as they grow. You can also see the pin feathers starting to come in around the beak and the wing edges. 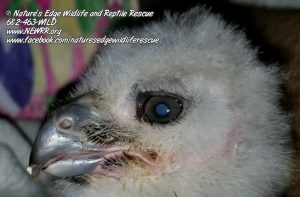 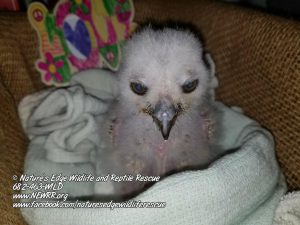 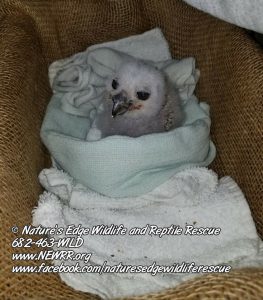 I Found a Baby Bird, Now What?

Baby season is starting up. We cover this with people every season. Please do not try and give food nor water to babies. They do not drink water. 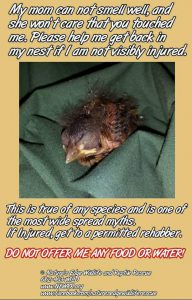 Took in this adult female Cooper’s hawk 6 weeks ago. She came in with a broken wing. After giving her time to heal and some physical therapy, she was ready to go back home.

Red-tailed Hawk Released After Being Shot

We were notified January 7, 2018, of a hawk that was shot. We drove over an hour, late at night, in the rain to meet Hunt County Scanner to pick up the hawk. The bird suffered a broken wing and some tissue and muscle damage. After almost two months of care which included resting the wing so it could heal and physical therapy to get the wing strong again, she was finally ready for release. We drove 90 miles to return the hawk to where she came from so she could be reunited with her mate. This is why we do what we do!